Everyone knows that when their toilet won’t flush, they have a problem. That’s not tough to figure out. Likewise with a completely clogged toilet. It’s obvious. Unfortunately, there are problems that are less obvious. Sometimes, for instance, your toilet just doesn’t work very well. Maybe it still flushes, but the flush is weak or too brief. Maybe you have to flush it multiple times to get it to work completely.

Whatever the problem, it’s not in your head. If your toilet doesn’t seem like it’s working properly, then it probably isn’t. Don’t wait for it to get any worse; act now. Here are three reasons why your toilet might not be working correctly, and what you can do about them.
‌

There’s not enough water in the tank 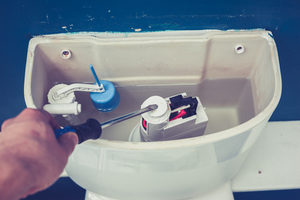 When you flush your toilet, you’re actually letting water from the tank into the bowl. Releasing a lot of water into the bowl quickly generates the suction required to flush the toilet. When the tank doesn’t contain enough water, it doesn’t release as much water as it should when flushed. You’ll notice a weaker flush, or water may enter your toilet bowl without starting a flush at all.

Most toilet manufacturers leave a mark inside the toilet tank to indicate how much water it should store. Find this mark inside the tank and make sure the water level rises to it after every flush. If you can’t find a manufacturer’s mark, make sure water rises to about inch beneath the tank’s overflow tube. If the water in your tank doesn’t rise to the mark, you have to adjust it.

Different toilets use different components to set the tank’s water level. Most toilets use either a float of some kind or a water intake assembly. Most floats are small, round balls connected directly to the fill valve. The fill valve stops filling the tank with water when the water touches the float. To raise the water level, all you have to do is manually bend the float arm up. If you have an intake assembly, look for a metal clip on the assembly itself. Move this clip up to adjust the water level.
‌

Something’s wrong with the flapper or lift chain

When you flush your toilet, you’re lifting the flapper and allowing the tank’s water to enter the bowl. The chain determines how high the flapper rises and (in older models) how long it stays open. If the flapper is damaged or loose, it could leak water into the bowl constantly. If the chain detached from the flapper or has too much slack, the flapper may not open properly. If either the flapper or chain aren’t working properly, they can create all kinds of problems–including your weak flush.

Usually, when a flapper isn’t working correctly, the best thing to do is replace it. The flapper-chain mechanism isn’t expensive, and it’s easy to replace. First, remove the detached flapper. Turn off the water to the toilet and flush to remove all the water from the tank. Then, unhook the flapper’s chain from the metal arm and remove the flapper. Take your old flapper with you when you buy a new one, so you can reference its size.

Your new flapper assembly should come with instructions for its installation. Not all flappers work exactly the same, so be sure to follow these directions. When the flapper’s in place, it should be snug. Test to make sure it’s not open by pouring a little water into the tank. Attach the lift chain so that it’s relaxed, with a little slack. It shouldn’t be too taut or too loose. Test the flapper several times before turning the water back on.
‌

The most obvious culprit for your weak flush is also the most common. Often, waste and other debris can form “partial” clogs in toilet pipes over time. These clogs aren’t enough to stop water flow completely, but they can slow it down.

Think of the partial clogs in your pipes like obstacles for your flush to push past. The harder the flush has to work to push past the clog, the less strength it has. When partial clogs substantially hinder your flushing, you might get an incomplete flush. In some cases, you may even notice some water return through the drain after the flush.

Aah, our specialty. As you’ve probably guessed, you should start by plunging your toilet. Use a flange plunger to plunge your toilet for 10 to 15 seconds. After you plunge, try flushing the toilet again and watching for improvement. Repeat the plunging two to three times if necessary, but be careful not to plunge too hard. If you’re still having your problem after three plunging attempts, it’s time to try something else.

Partial clogs can be particularly stubborn, especially if they’re caked onto pipe walls or if they’re the product of corrosion. Try turning off the toilet’s water, flushing it, and then adding hot (not boiling) water to the bowl. Let the water sit for several minutes, then flush it. If that doesn’t work, either, you should consider snaking the toilet. It’s also possible the clog may be deeper in the pipes, near the sewer line. In that case, it’s best to get professional help.

Whatever the issue preventing your flush, remember that you don’t have to figure it out on your own. No matter where the problem is, Mike Diamond has seen it and fixed it before. Seriously, no matter what the problem is.

If you’re at your wit’s end, you can always call Mike Diamond to restore your toilet’s flushing power. We’ll make sure everything ends up exactly where it needs to be, every time. Plus, we’ll smell good doing it!

Mikediamondservices.com has a Shopper Approved rating of 4.6/5 based on 3136 ratings and reviews.