Home > HVAC > Getting to Know your Friend, the Air Conditioner 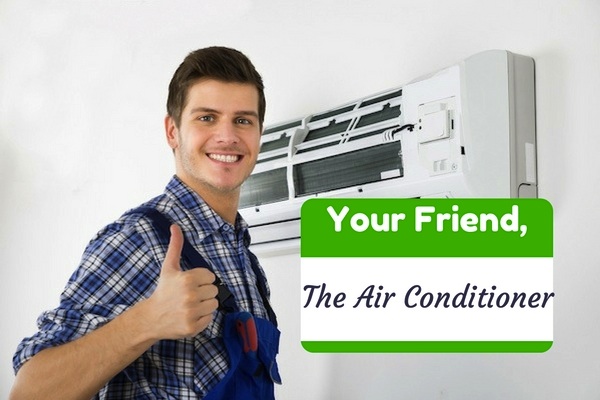 Have you ever stopped to think about how really, really great your air conditioner is? In our experience, no one really appreciates their air conditioning until the first time it’s taken away from them. Have you ever had your air conditioner go out? Has it happened to you during summer? It’s really not great, huh? People aren’t built to get that hot; it does things to them–to their minds. We call it the “heat madness.” Did you know there’s a “definite correlation” between raising temperature and raising violent crime? Now, we’re plumbers, not sociologists, but that sounds an awful lot like the work of the “heat madness.” Civilization just can’t cope with that much sweatiness. We lose our, y’know, cool. Plus it’s icky.

Our air conditioner puts a stop to all that. It stands–ever vigilant, ever watchful, against the relentless assault of nature herself. Who knows how many frustrated, sweaty people stood on the very precipice of madness, only to be snatched from its clutches upon stepping into a nice, temperature controlled room? When you think about it, air conditioners may well be essential to the survival and prospering of modern civilization!

…Melodramatic? Sure. We just really dig air conditioners, alright? We’re Californians. We think sometimes they don’t get the appreciation they so richly deserve. That’s why we wanted to do a little PR work for them, and write all about your air conditioner. Knowledge is power, and power runs cooling, and cooling staves off the heat madness. Therefore, knowledge about your air conditioning unit will save your mind! Yeah, that checks out. 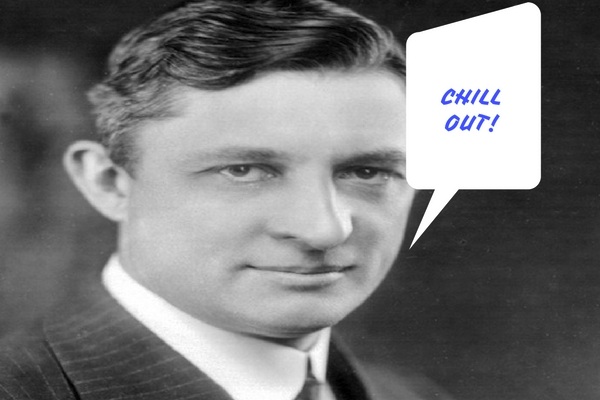 Where It Came From

When a young mechanical engineer by the name of Willis Haviland Carrier unwittingly developed the first air conditioner in 1902, he wasn’t trying to find a way to cool people down. Instead, he was hired to rig something up to solve a problem at the Sackett-Wilhelms Lithographing and Publishing company in Brooklyn, NY, where he worked. The paper stored at Sackett-Wilhelms was absorbing moisture from the warm air, which was making it difficult to use the Publishing companies’ layered inking technique on it. To solve this problem, Carrier rigged up a way to blow the building’s air across chilled pipes.

As the air past the pipes it was cooled and therefore dehumidified. The invention worked, and Carrier noticed something: as the building was dehumidified, the process was also lowering the temperature. The rest, as they say, is history. Once Carrier had pivoted his invention into a means of cooling rooms, he was able to establish the first air conditioning manufacturing plant. Unsurprisingly, the first air conditioners were huge, noisy, and chalk full of chemicals, so they didn’t see immediate widespread use.

The general public was exposed to air conditioning for the first time largely in movie theaters in the 1930s. Some historians believe the air conditioner was instrumental in the increasing popularity of movies, because those affected by the Great Depression would flock to the cool, dark rooms to escape the heat. Air conditioning really took off in the 40’s and 50’s when a study showed that temperature-controlled workplaces were more productive than workplaces without temperature control. In 1947, a British scholar named S.F. Markham wrote, “The greatest contribution to civilization in this century may well be air-conditioning.”

Today, air conditioning is so widely used and distributed that it’s assumed a home or workplace will have. Some have even argued that air conditioning should be a basic human right.  Air conditioning has unquestionably had a significant impact on the development of modern civilization. Plus, it makes life a lot less sweaty, which is just great. 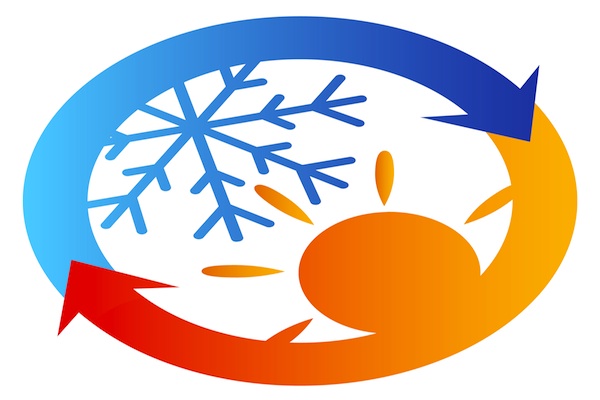 One of the *ahem* coolest things about the air conditioner is its elegant simplicity. All air conditioners use the process of refrigeration to cool indoor air. That’s right: the same basic process that keeps your food cold also takes care of you. Refrigeration makes use of the physical law known as phase conversion. Phase conversation is when liquid converts to gas. During this conversion process, the changing liquid/gas absorbs heat. Air conditioners use compounds called refrigerants. Refrigerants are designed to convert from liquid to gas at relatively low temperatures, which makes phase conversion possible without expending a lot of energy and time.

The unit’s main system housing begins the process of phase converting the refrigerants, and then the system’s fans pull the warm air in your home through your HVAC ducts and all the way to the refrigerants. Here, the system absorbs warm airas a bi-product of phase conversion and converts it into cool air. Then, more fans push that cool air back into the ducts, circulating it throughout your home.

The last step of the process is making refrigerants back into liquids again, so that phase conversion can happen again. To do this, air conditioners make use of a compressor, which puts the gas created by phase conversion under high pressure. This pressure creates heat. The heat from this pressure is released safely outdoors via the condenser coils and yet another fan. That’s why, if you walk by the housing of your central AC unit in your yard, it will be giving off heat. As this heat is released, the gas cools back down and turns back into a liquid, and the process is ready to begin again.

As you can see, air conditioners perform a sort of endless cycle. Liquid becomes gas, cooling the air in the process, then gas becomes liquid again. Rinse, lather, repeat. We think it’s kind of beautiful; duality, sunrise/sunset, the cycle of life and death and all that. Ok listen we already said we like air conditioners, alright. If you wanna really nerd out, check out this exhaustive explanation from how stuff works about all the different parts of AC units, and how each different kind of unit works.

Unless you’re in love with it, the air conditioner can be an easy thing to forget about. It’s always there, quietly making our homes habitable and safeguarding our fragile psyches against the hot, buffeting winds of madness.

We respect and admire the air conditioner’s dogged, tireless performance of its duty, but even this wonder-appliance needs help sometimes. Whether you need your AC unit repaired or replaced, or you have any questions about its operation and efficiency, Mike Diamond are your experts. And since you read our silly gushing all about AC, we have a special coupon offer for all fellow fans. As you can see, we know and love our air conditioners, so when you contact us, you know that we’ll treat your AC with the care and tenderness we feel for it in our big, strange plumber’s hearts.