Home > Drain Cleaning > Why Bacon Grease is So Bad for Plumbing

In their recent article “Everyone Pours Bacon Fat Down the Drain; Everyone Lies About It,” the Wall Street Journal reveals a terrible truth plumbers are already all-too-familiar with. People all over the world are still pouring their bacon grease down their drains all the time. This is a significant problem.

If plumbers are superheroes (hear us out!), then bacon grease is our most dastardly nemesis. We’d call it “the Clogger!” Grease clogs are among the most terrible, damaging clogs that can happen in plumbing systems. They don’t just damage your home’s pipes, either; they can seriously hurt the larger sewer system. Here’s why bacon grease is such a problem, and what we can all do to solve it. 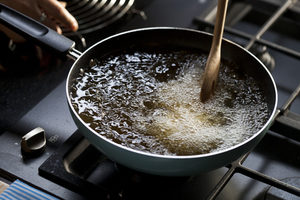 We probably couldn’t design a more efficient drain clogging substance than bacon grease if we tried. Everything about it is perfect for clogging drains. Here are a few of the reasons why bacon grease causes clogs like virtually nothing else:

Grease is only a liquid when it’s very hot. As soon as it starts cooling down, it turns into a solid and hardens. When you pour it down your drain, it only travels so far before it cools down. When that happens, it gets stuck in the pipe and starts obstructing water flow.

Think of grease like a time bomb you’re dropping down your drain–a bomb no one can disarm. At some point, that grease will solidify and it will block water flow. Every time.

Bacon grease rarely makes it very far through pipes, even in its liquid form. Grease is sticky. When it travels through pipes, grease often gets stuck to the sides of the pipe walls. Then, it sits on the pipes cooling, until–you guessed it–it turns into a solid.

To matter matters worse, grease doesn’t just stick to things; things stick to grease. Any other materials you pour down the drain will get stuck in the congealed grease on the pipe walls. Over time, this collection of grease and garbage only gets tougher, smellier, and more disruptive.

Remember how we said things stick to grease? Sometimes, grease sticks to grease. As it congeals, grease tends to come together inside pipes and sewers. It builds up and becomes bigger and harder.

The bigger the mass of grease, the harder it becomes to remove from the drain. Grease clogs that are 10 feet long or longer are not uncommon.

Grease does break down over time, but what it breaks down into causes its own problems. When the fats in grease breakdown into fatty acids and glycerol, they can combine with the calcium in sewers.

The Problems Bacon Grease Clogs Cause 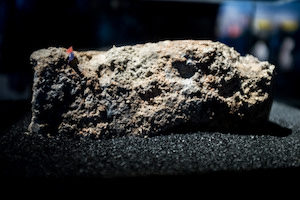 Bacon grease clogs aren’t exactly like every other kind of conventional clog–they’re worse. Fat, Oil, and Grease (FOG) clogs can permanently compromise the health and effectiveness of plumbing. Not just your plumbing, either–FOG can and has inflicted serious damage on city infrastructure! Here’s how dumping bacon grease down your drain can hurt your plumbing, and your city’s plumbing.

Bacon grease clogs tend to be more difficult to remove than most. When bacon grease congeals, it gets very stuck in the place where it hardened. If the grease hardened inside your pipe, it could completely block off the drain. The suction force generated by plumbing tends to be insufficient to clear hardened grease clogs.

While clogs build up, they’re also damaging your pipes. Grease is heavy, and it puts an inordinate strain on your pipe systems. Eventually, that strain could leak to leaks, bending, or even fracturing. Incomplete clogs distribute water pressure unevenly through the pipes as water works to get by, which also leads to damage.

Did you hear about the Whitechapel, London fatberg? Last year, Thames Water employees removed a 820 foot, 130 TON fatberg from the east London sewer. That’s longer than two football fields and heavier than a blue whale. That fatberg was made of grease and trash that got caught in grease.

Fatbergs in sewers are far more common than you’d think. The EPA estimates that of the 10,350-36,000 of annual US sewer overflows 47% happen because of FOG. Back in 2001, the EPA sued LA for allowing 2000 overflows over five years. 41% of these overflows happened because of fat. In New York, grease accounts for up to 71% of sewer backups. The city spent $18 million dollars in five years fighting their fatbergs. That’s a figure any super villain would be proud of!

Obviously, this isn’t just your problem. Wall Street Journal said it–EVERYONE pours bacon grease down the drain. We all need to get better about paying attention to how we use our plumbing systems. Learning about how grease hurts your pipes is a great way to start.

If you need some help keeping your plumbing safe and clean, give Mike Diamond a call any time. We’re always ready to do our part and help keep “The Clogger” from hurting our city! (Does that sound like something a superhero would say?)