Home > Blog > How to Use a Plumber’s Snake

A plumber’s snake, or drain auger, is a tool that reaches down into pipes to remove clog-causing blockage. Snakes make up the middle ground between common household plungers and the really big guns. If you’re dealing with a clog too stubborn for your plunger, then a snake is your best chance to clear it out yourself.

Snakes are much more powerful drain-clearers than plungers, but they’re also slightly riskier to use. If you use your plumber’s snake improperly, then you might tear up your pipes or even create leaks. To avoid doing that, it’s important to know how your snake works and how to use it correctly. Here’s everything you should know about using a plumber’s snake.

How does a plumber’s snake work? 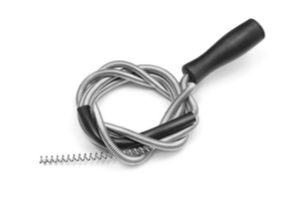 How do you use a plumber’s snake?

Snaking is a surprisingly easy and accessible homeowner project. As long as you understand how to use your snake, you should solve your problem without creating new ones.

Sometimes, however, you may not be able to beat that clog, no matter what you try. Don’t despair! After your snake, the next step is to call Mike Diamond. We’ve got the tools and knowhow to find and break up any clog, no matter how stubborn.

Mikediamondservices.com has a Shopper Approved rating of 4.6/5 based on 3114 ratings and reviews.