Home > Plumbing > The 4 Most Horrifying Plumbing Problems… That Could Happen to You! 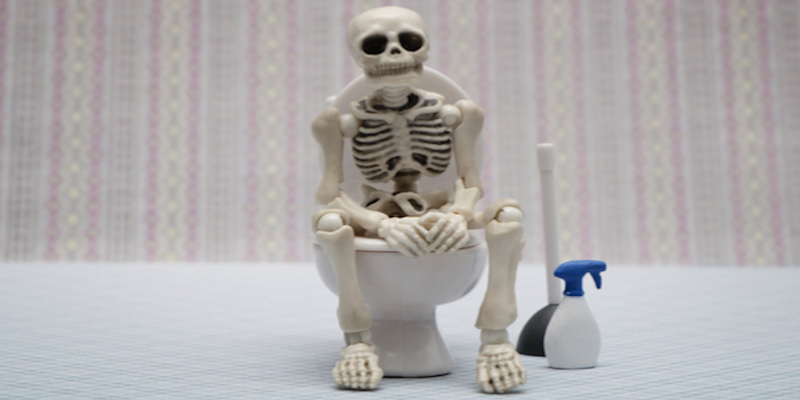 It’s Halloween season, and we write about plumbing. That can only mean one thing: it’s time for some plumbing horror stories. If you’re fan of these kinds of “it came from below” plumbing horror stories, however, you may be inured to their chilling effects. That’s why we’re doing something a little different this year.

A “fatberg” is a mass of fat, oil, and grease (or “FOG”). When people flush FOG down their drains, it turns solid as it cools. Solid FOG sticks to pipe walls or clogs instead of moving through the pipe. The longer the FOG remains in the pipe, the more it congeals… and grows. The sticky berg collects more and more FOG and debris over time, growing larger and more obtrusive.

There is virtually no limit to how large a fatberg can become. Just ask the heroic employees of Macomb County, Michigan’s Public Works department. Last month, they pulled a fatberg out of their sewer that was 100 feet long. Not big enough? What about the 820 foot long, 130 ton fatberg engineers removed from sewers beneath Whitechapel, London? Fatbergs are the scourge of the modern plumbing world. When we say you should never pour FOG down your drain, fatbergs are why. 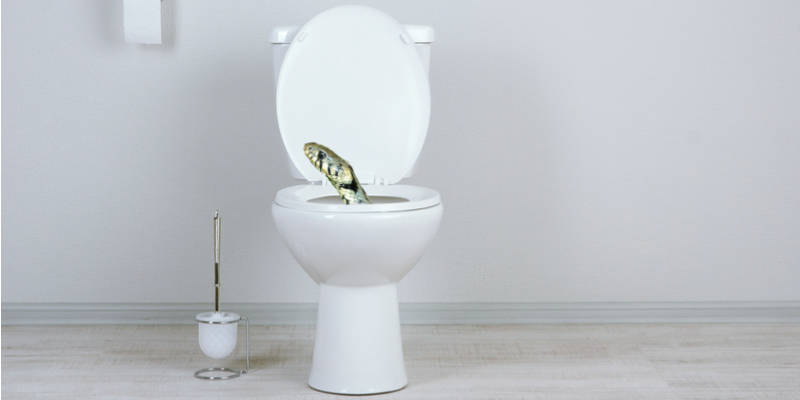 A different kind of “plumbing snake”

Yes, snakes can crawl through pipes and enter homes through toilets. Yes, snakes can and have bitten the people sitting on toilets (warning: this link is disturbing). Before you destroy all the toilets in your home, however, know that this is extremely unlikely. Snakes get into toilets by slithering up from the sewer pipes. They don’t enter sewer pipes very frequently, and if they do they rarely survive for long.

Snakes wander into sewer pipes several ways. They might fall in through air vent pipes or chase prey into storm drains or damaged pipes. Leaking septic systems provide a particularly likely place for snakes to enter your pipes. Once inside, snakes easily swim through the six feet of water between the pipes and your toilet. It doesn’t happen often, but it can! Think of this as one more (rather compelling!) reason to put the lid down after you use it.

Sinkholes form when a natural depression in the earth has no external surface drainage. Without proper drainage, water in the soil can’t drain away and redistribute properly. Instead, that water collects, dissolving the structures propping the ground up. Eventually, the groundwater hollows out the earth entirely, creating empty cavernous spaces just beneath the surface of the dirt. Without support, the surface collapses and whatever’s on it sinks into the hole below.

Sinkholes usually happen in places where the rock beneath the soil surface is soluble and easily dissolved. Unfortunately, however, sinkholes can also happen in the event of accidents, weather disasters, or serious plumbing problems. Plumbing leaks in pipes may soften the ground around the pipes and eventually create a sinkhole. If a sinkhole opens near home, the results can be disastrous. If you think excess water buildup is damaging your yard or home, call us right away!

Conventional water heaters heat and store water inside a large, cylindrical metal tank. The heating element inside this tank heats up the water stored in the tank. As the system heats up, the water inside it naturally expands. When that happens, the water strains against the sides of the tank and generates excess pressure. Over time, this pressure could cause leaks, ruptures, or (in extreme cases) even the infamous water heater explosion.

Normally, water heaters have a couple countermeasures to prevent pressure buildup. If the water gets too hot, the heater’s thermostat should step in and turn the heater off. The tank has a Temperature & Pressure (T&P) valve that releases pressure if too much builds up. Dangerously excessive pressure only builds up if these countermeasures fail or sediment interferes with the heater’s correct function. You can prevent both of these scary scenarios by regularly maintaining your water heater.

‌
Loathe as we are to break our spooky spell, we feel obligated to impart at least a little good news. Each of these admittedly terrifying troubles is completely preventable. Just stay on top of your plumbing maintenance, and you’ll survive whatever horrors your home can throw at you.

If you’re ever dealing with a plumbing monster (in any form!), just give Mike Diamond a call. We’re always prepared to exorcize your plumbing’s demons.